SHOP FROM OUR SELECTION OF DANIEL DEFENSE PRODUCTS

For more information about Daniel Defense, check out the about section. 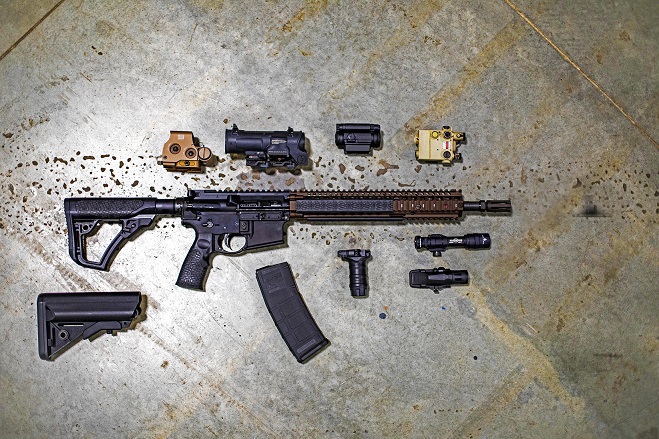 Daniel Defense is one of the America’s best manufacturers of AR-15 rifles for civilians, competitions, and professional uses. 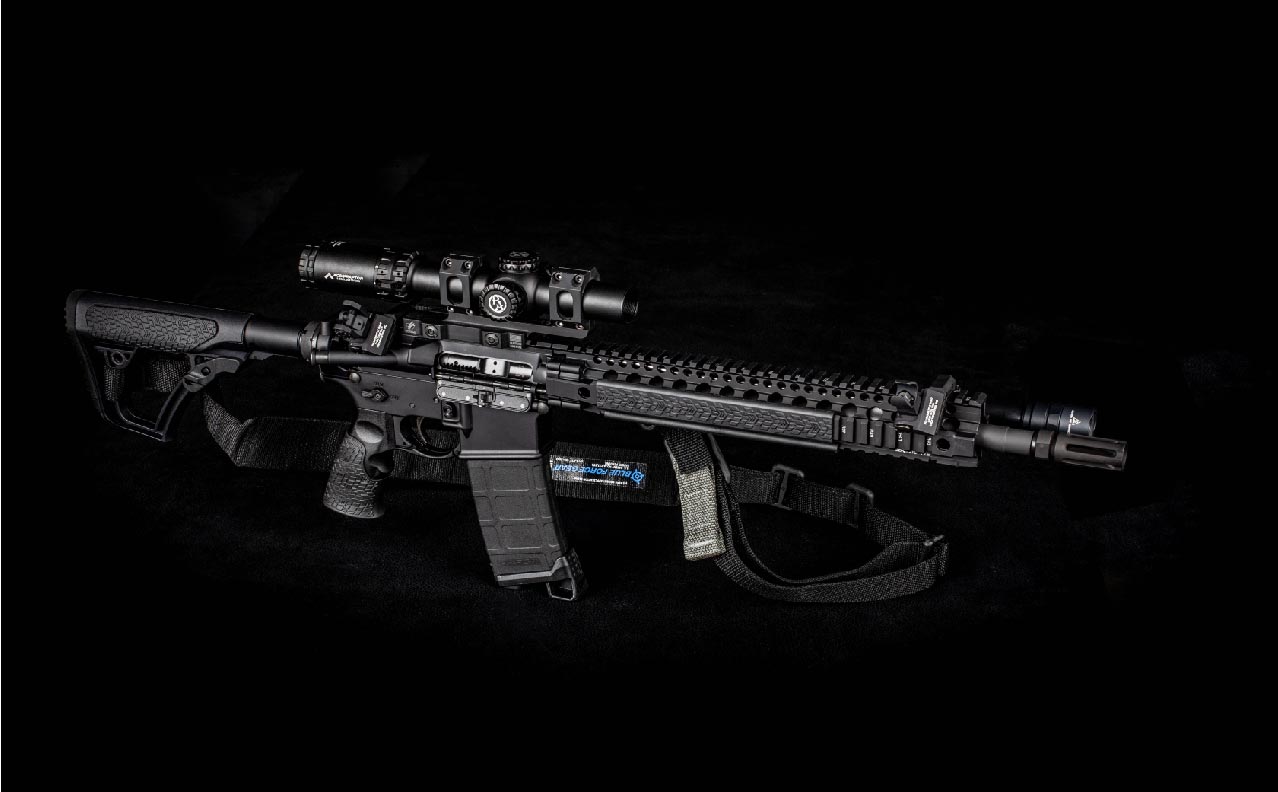 The Daniel Defense DDM4 is their main product line up, and it was the first firearm designed by their team of engineers. The DDM4 V1 featured mostly Mil-Spec components like the upper and lower receivers but came with the improved Omega X quad rail system that wrapped around the pinned front sight gas block combo. This extremely rigid AR 15 rifle set up is built for heavy-duty use but left a little bit to be desired.

Since then, their AR 15 rifles have been improved dramatically with their most popular model—the MK12 that features an 18” cold hammer-forged barrel and improved Daniel Defense furniture.

The DDM4 has been through many iterations, and the DDM4 V11 features a lightweight M-LOK handguard with a thinner barrel.

Semi-automatic modern sporting rifles chambered in 5.56, .308, and 6.5 Creedmoor was only the beginning. The new Daniel Defense Delta 5 bolt action rifle is built from the ground up in the Daniel Defense factories.

Currently, their line up consists of the Delta 5 .308 and 6.5 Creedmoor, which took the modularity of the A.R. and introduced it in a bolt-action rifle. 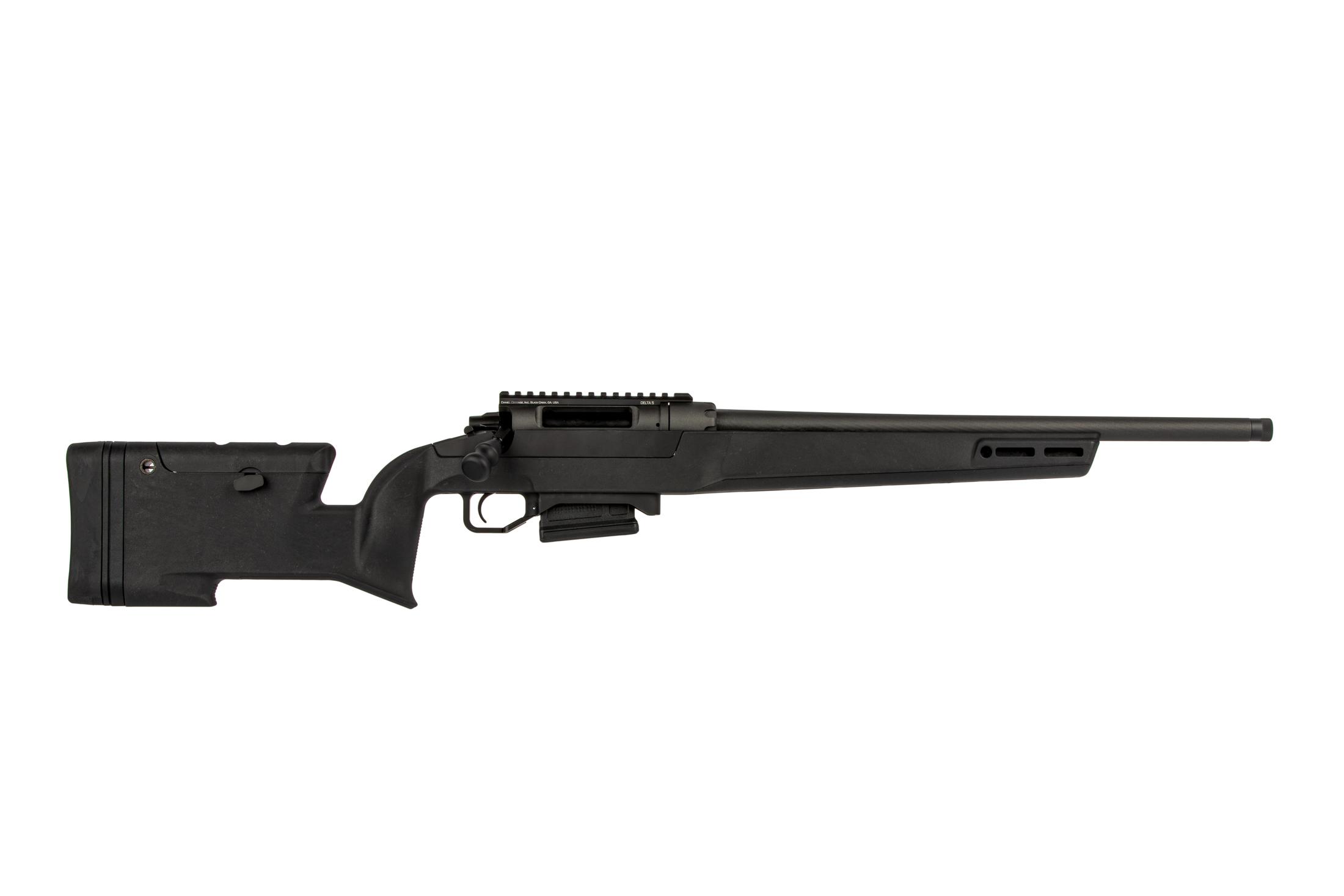 They are chambered in a .308 Winchester and a 6.5 Creedmoor, have a changeable barrel, a fully configurable stock with M-LOK attachment slots, and a trigger that adjusts for accurate long-range performance, featuring an out of the box customization.

Daniel Defense upper receivers come in different configurations depending on what you’re looking for. 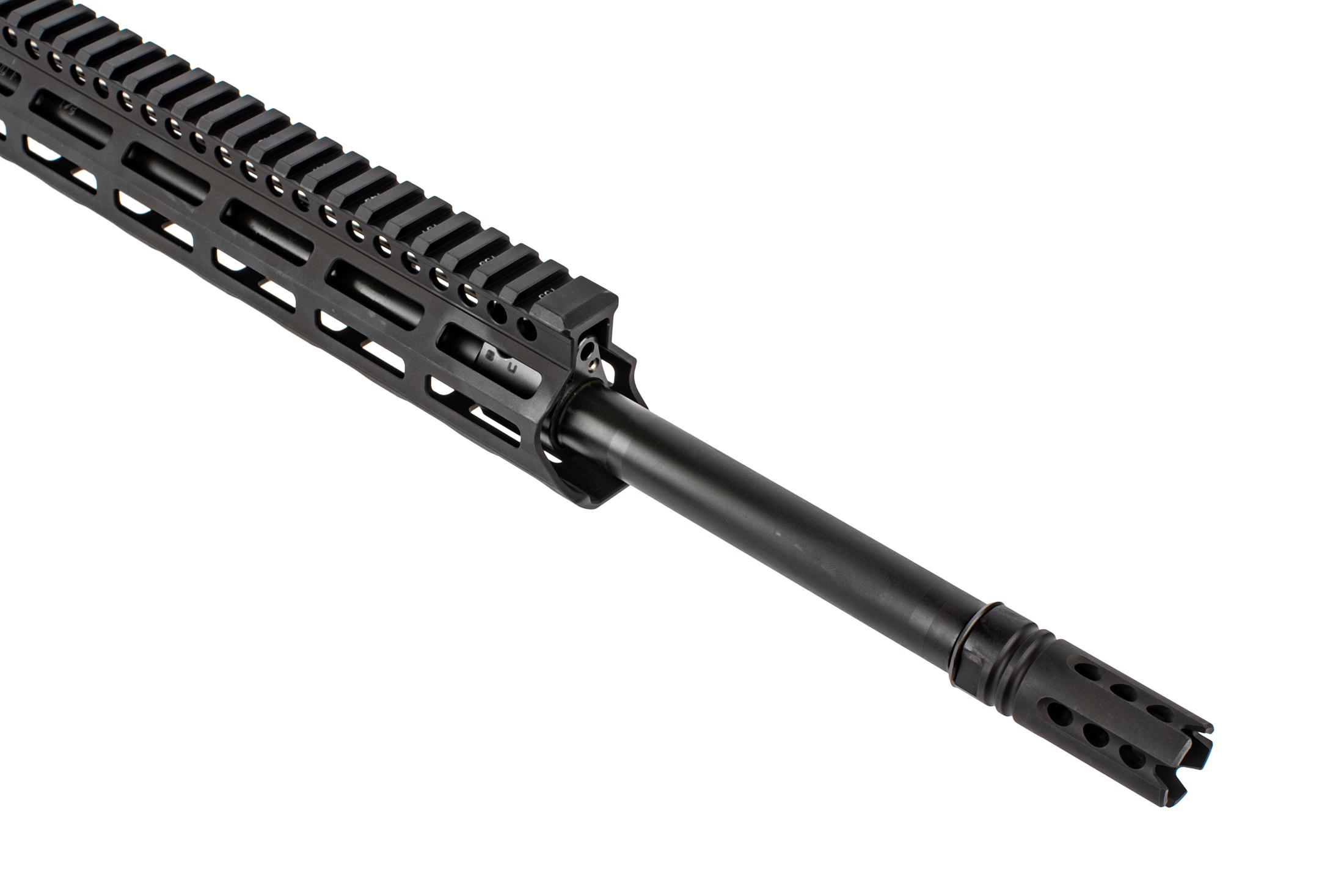 Daniel Defense makes upper receivers in most any length you would like, including pistol and SBR platform length's at 10" and 12", and all 3 standard rifle length barrels at 14.5", 16" and 18".

Each comes with either an M-LOK or Quard Rail system, are Chrome lined 41V50 chrome moly vanadium and come in several color options.

Daniel Defense has a variety of rails in M-Lok and Keymod versions. Their categories are divided into DDM4, MFR, Omega, and RIS Rails.

The DDM4 rails are found on most of the same name rifle’s configurations, and it consists of an optimized one-piece free-floating rail. 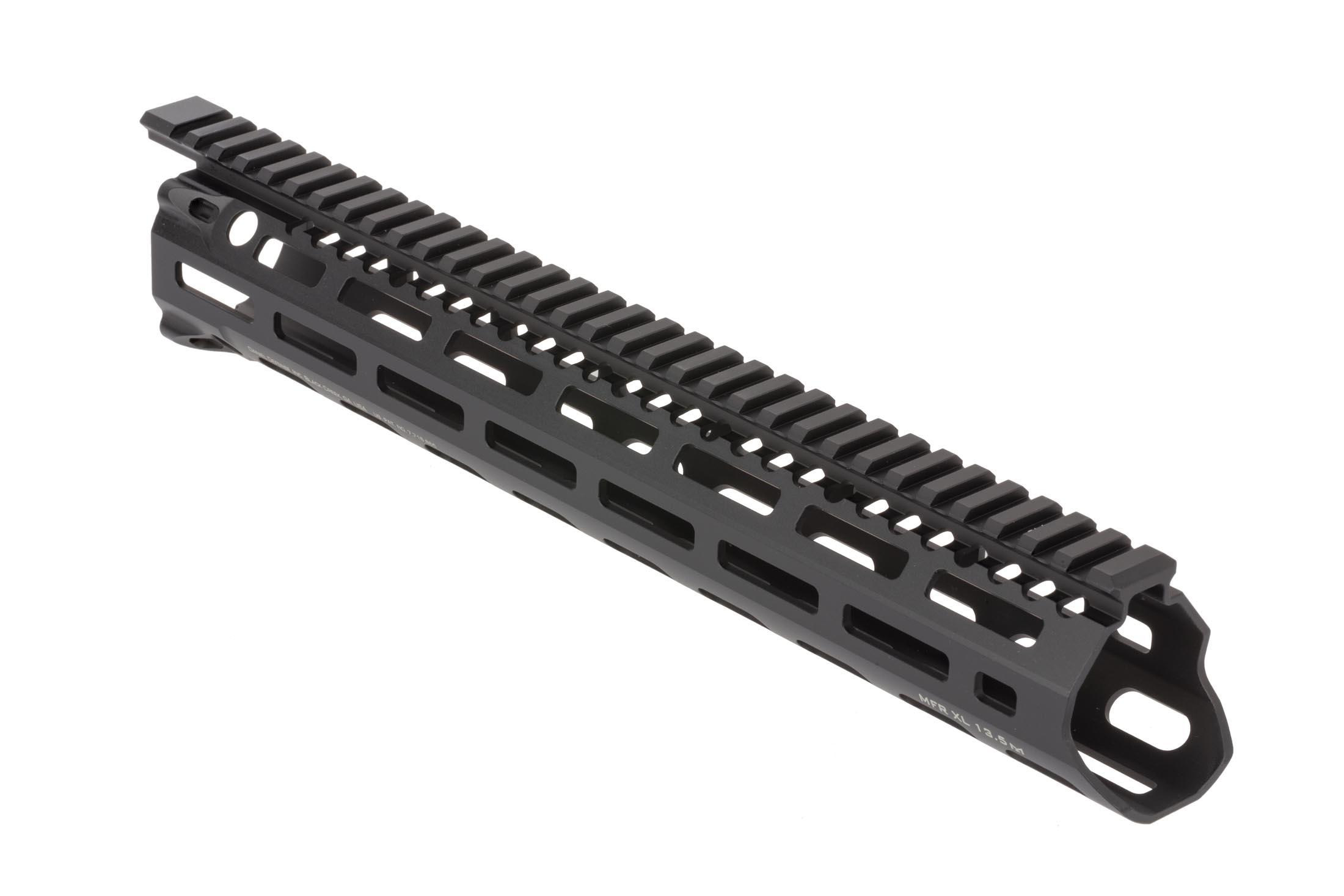 The Omega Daniel Defense Rail it’s a plastic free-float handguard with Keymod and M-Lok attachment system. It’s easy to install since it does not require modifications to the rifle.

The Daniel Defense RIS II free-float is one of the toughest and most effective rail systems for AR-pattern rifles available on the market.

It is a combat-proven with a patented bolt-up mounting system that was designed for the United States Special Operations Command (SOCOM).

Daniel Defense was founded in 2001 in Georgia by Marty Daniel, starting with his vision to create custom rifle accessories for his rifle. At that time, already an enthusiast, he was unable to buy the rail systems he wanted from another manufacturer, so he decided to design and outsource the production of an M4-compatible rail system.

After one year, at the 2003 SHOT Show ( the firearm industry’s largest trade show), Daniel met representatives of the U.S. Naval Surface Warfare Center (NSWC), who incentivized him to submit his product on a bid for an upcoming government contract, issued by the Special Operations Command (SOCOM). Marty won the contract.

Today, Daniel Defense manufactures its products in a brand new state-of-the-art facility in Georgia that consists of 300,000 sq. ft. of manufacturing space and office space—consolidating their two previous facilities under one roof. 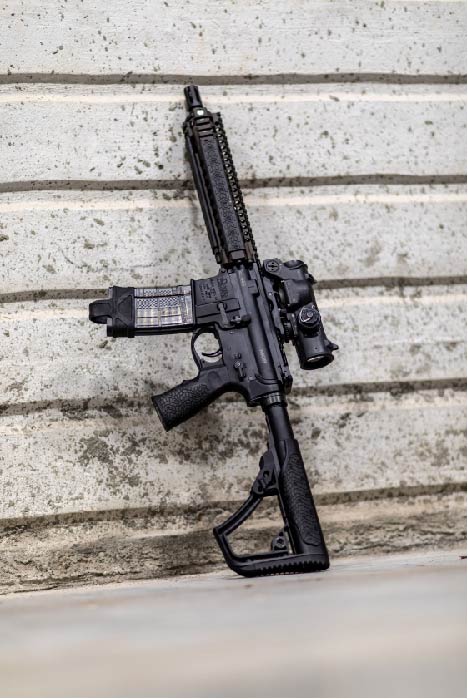 The company is one of the leading and fastest-growing brands of AR-15 rifles in the U.S., and it is a family-owned and privately held firearms manufacturer.

Does the military use Daniel Defense?

In 2005, Daniel Defense won the US SOCOM contract with its RIS II Free Float handguards and delivered the contract in 2006.

Currently, the United States Special Operations Command (SOCOM) and the United Kingdom’s Ministry of Defense use their M4 rail systems, including a handguard for the L85.

Is Daniel Defense Made in the USA?

Daniel Defense believes in building quality products and one of the only ways to be able to consistently deliver quality products to customers is by manufacturing as much as possible in house.

From a cold hammer forge machine, to precision CNC machinery, and even a robotic Cerakoting station, Daniel Defense produces up to 90% of their products in the United States of America—including a metal 3D printed suppressor called the DD Wave.

CONTACT US IF YOU HAVE ANY QUESTIONS ABOUT DANIEL DEFENSE

If you ever have any questions about Daniel Defense complete AR 15 rifles or any other parts and accessories, don’t hesitate to call. Our world-class customer service team and firearms product specialists are standing by to help. Thanks for choosing Primary Arms, your one-stop-shop online gun store , and we’ll see you on the range.