CHECK OUT THE BEST SELECTION OF INFORCE LIGHTS FOR SALE

The Inforce brand of weapon lights is owned by Emissive Energy Corp., an American ISO 9001:2008 certified manufacturer of light fixtures and equipment. They deal specifically with weapon mounted lights and accessories for defense, law enforcement, homeland security, and citizens around the world.

Additionally, Inforce lights are issued to every branch of the United States Military and Federal agencies.

With polymer accessories becoming increasingly popular in the firearms industry, Inforce decided to jump on the idea and build their weapon light systems around this lightweight and durable material to create a product like nothing else on the market.

The Rifle and Carbine Inforce lights come in a few different varieties depending on the intended use. They offer quick attachment and up to 800 Lumens of white light with a 2-hour battery life.

Inforce lights come with either white light or a combination of white and IR light for night vision compatibility. 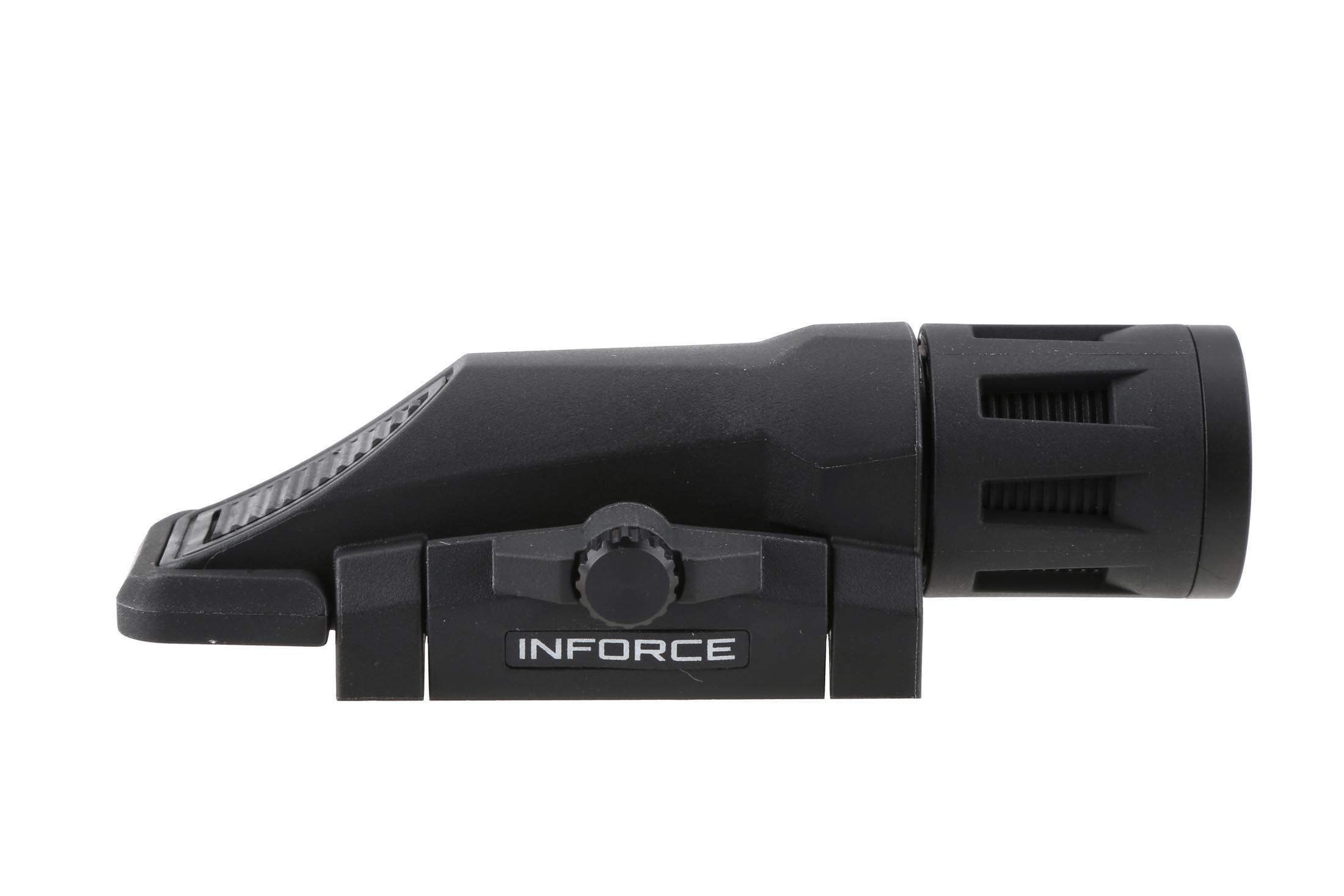 It quickly mounts to any 1913 picatinny rail with the integrated rail clamp that requires no tools.

The rear facing textured activation button makes it easy to use when attached at the muzzle end of a handguard and has multiple illumination modes like continuous, momentary, and strobe.

The high efficiency beam has a total run time of up to 1.5 hours and features a model with a 100mW infrared beam that can last up to 4 hours. While this light is small and compact, customers wanted something with a little more power, so they released the WMLx that boasts 800 Lumens.

The Inforce Light 800 Lumen version is slightly longer but still weighs in at only 4 ounces and retains all the same features of the smaller version. The high intensity beam offers a longer range and wider field of view to help with target identification and situational awareness. 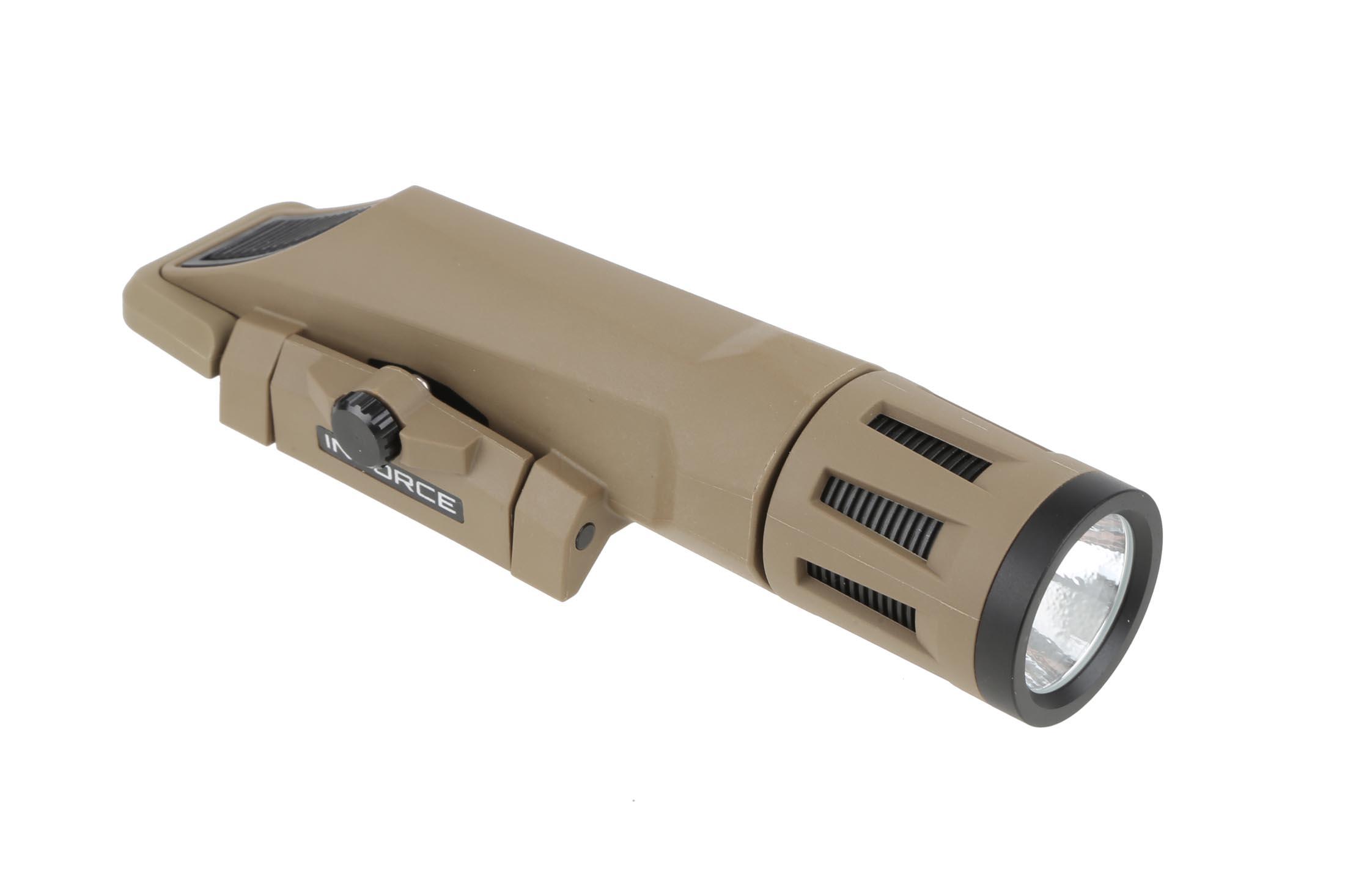 Even though it uses more energy, it’s larger size accomodates more batteries, giving it a battery life of up to 2 hours. The WMLx, as well as the smaller version, are waterproof up to a depth of 66 feet, so they are guaranteed to work in any weather condition.

Just like the WML, the WMLx has an infrared version that offers 400mW of IR light for 4 hours. Not only do they make lights for rifles, they have transitioned the same compact, ergonomic design to fit on handguns as well.

Because handguns are the most common firearm for home defense, they decided to develop and manufacture a pistol mounted light that can attach to picatinny and universal pistol rails called the Auto Pistol Light. 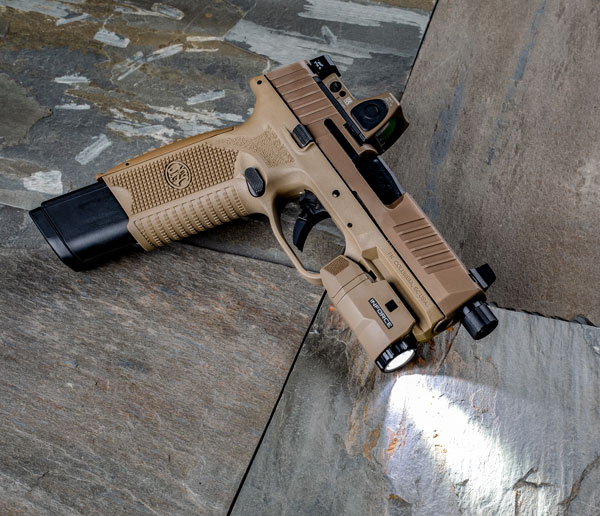 It has the same design philosophy of the rifle lights but scaled down to fit snugly underneath a pistol barrel while still offering 400 Lumens of bright white light.

The Auto Pistol Inforce Light features ambidextrous activation switches that extend around the trigger guard for quick and easy access whether the situation calls for constant or momentary light.

The 400 Lumen light has up to 1.5 hours of runtime on a single CR123a battery and has a lockout mechanism to prevent accidental discharge.

The APL has been extensively tested on several pistols to ensure proper fit and function on all the popular brands. 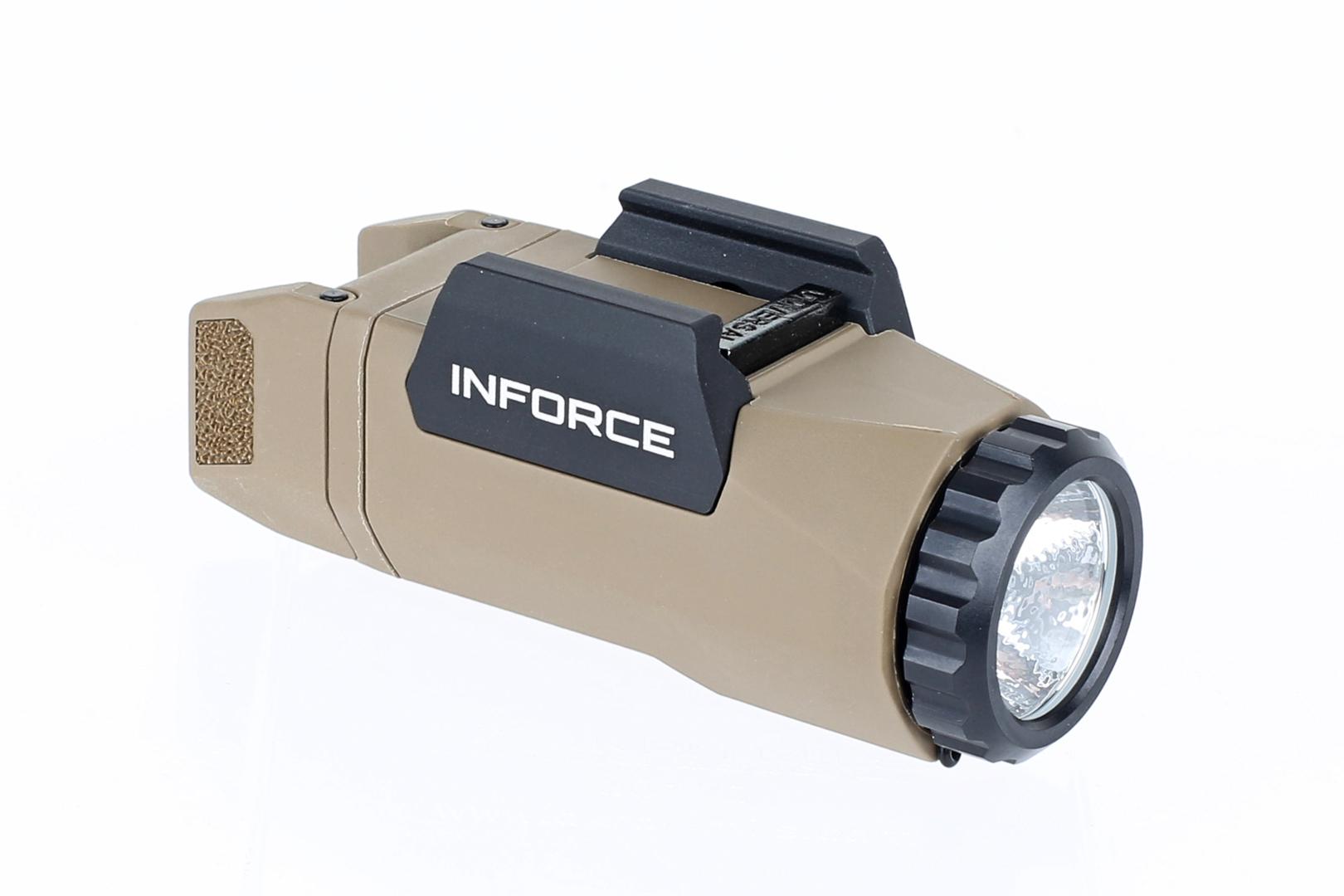 Just like every other light, the APL is built to withstand the recoil from a snappy concealed carry 9mm handgun, to the slow and heavy recoil of .45 ACP.

Even though this light is compact, they designed a model that is even shorter for use on shorter barreled pistols to reduce the overall profile and the amount of carbon buildup on the lens from firing.

For smaller handguns, the APLc was produced to be an even shorter and more compact version. It produces up to 200 Lumens of white light for 1.5 hours and weighs less than 2 ounces.

It is designed to fit on shorter barrel concealed carry handguns and effectively stays out of the way when holstered. They also have a Glock model that is designed to sit flush with the muzzle of a G19 handgun.

For most situations, a handheld flash light is the go-to option and their lights are designed to be ready for anything.

Their LED flash lights have many of the same features of the weapon lights but are designed to be more ergonomic and have an aggressively textured polymer housing that allows for a better grip. They have two models: the 9Vx and the TFx, with the latter being their newest offering.

The TFx handheld flashlight emits from 60 up to 700 Lumens of white light for a total of 12 hours on the lowest setting and 2 hours on the highest. 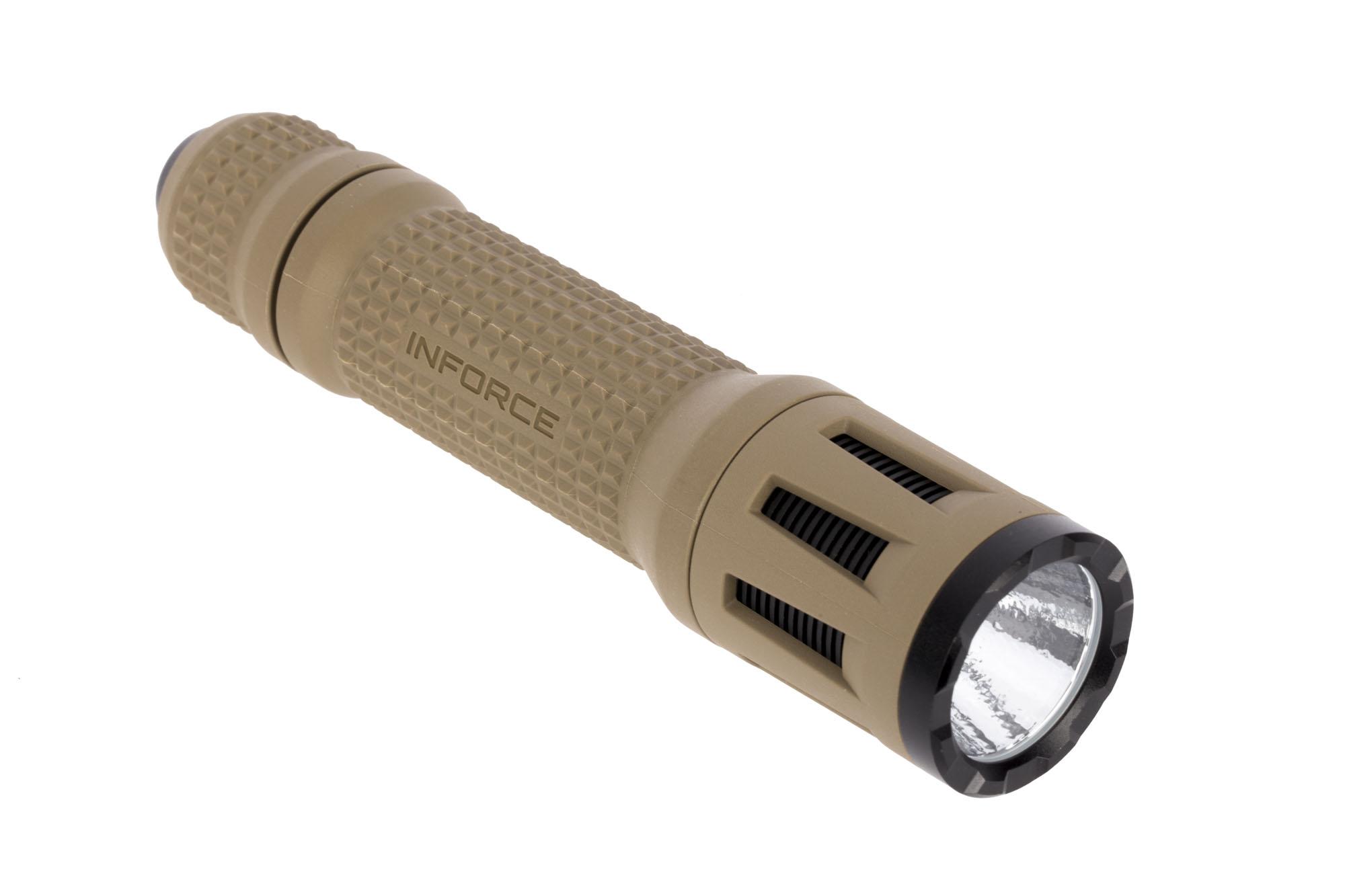 It runs via two CR123a batteries and is waterproof up to 66 feet. The rubberized tailcap switch allows for either momentary light with a soft push or constant light with a full click depending on the situation.

This light comes with a pocket clip for EDC, weighs just 3.75 ounces, and is only 5 inches long, so it virtually disappears when placed into a pocket.

The TFx light also features the patented heat dissipating vents that allow for the LED to last longer without overheating. This model, like every other model, can either be had in a black polymer finish or flat dark earth.

Inforce is dedicated to providing military, law enforcement, and civilian customers: international and domestic, with high quality flashlights and weapon mounted lights that will brighten up the darkest environments in the most adverse conditions.

Whether in home defense situations, power outages, or daily use, portable and weapon mounted lights are guaranteed to get the job done.